Ansuz X-series – Magic by the metre

The effect of various cables & power boxes in hi-fi contexts is and will be a source of eternal discussion. However, a broad consensus is gradually being reached among all the world’s enthusiasts and music lovers. Cables do differ, some more than others. The market is literally overflowing with countless producers who believe they have found the holy grail. They very rarely do, and it can be extremely difficult for individual users to find their way around the so-called “cable jungle”.

The manufacturers behind the Ansuz cables were only too aware of this problem and from the outset set out to produce something radically different from what had previously been heard.

Two well-known and highly competent people in the shape of Lars Kristensen and Michael Børresen decided after many years and much experience at bla Nordost to start manufacturing their own cable series.

Ansuz x-level series is the so-called entry-level series, where the ordinary user is given the opportunity to step into their unique and unrivalled world of “cable art”.
Ansuz cables regardless of caliber and price offer quite unique features in their construction and not least their sonic capabilities. So unique in fact, that they are practically without competition in each of their respective price segments. A common feature of all Ansuz cable series is the ultra low inductance/resistance these cables contain.

The complicated manufacturing process of the so-called “raw cables” ensures this incredibly low resistance which is undoubtedly one of the features that make Ansuz cables so special when we talk about openness and punch-through.
The X-level series features several of the core technologies that raise this cable series far above the norm for what can rightly be expected from a cable today.

Ansuz x-level “Mainz” which is the designation for the so-called power cables at Ansuz.
These are considered by many to be the most important cables in any serious sound system, and rightly so. Here, low resistance and great mechanical stability contribute greatly to creating the so-called black background that is the basis of all serious high-end sound.

Ansuz x-level “signalz” is the term for what we colloquially call signal cables. These are also manufactured according to the same patented principles focusing on low resistance and high mechanical stability. This is clear at first listen. There are holes and a level of detail that other manufacturers can only dream of.

Ansuz x-level “speakz” is the term for the speaker cables which are considered by many to be the weakest link in many cases.
These are in fact the last cable link in the chain if you disregard the speaker’s internal cabling. If there is not the same gap here as in all the previous joints, the sound is slowed down here and you do not get the full effect of your efforts. Fortunately, the x-level “speakz” is designed with the same features as the rest of the series, so here the sound is truly unleashed.

Ansuz x-level digitalz is what is colloquially called digital cables. These are used as links between all components where digital signal transmission occurs.
This could be from an external streamer or Dac to an amplifier or drive. In today’s digital media world, this type of cable is important and the quality of such a cable is not without importance for the sound quality. The Ansuz x-level digitalz” proves this to the full by direct comparison with a standard digital cable.

Whatever cables are focused on in this so-called entry-level series, just remember that Ansuz starts their level where many other manufacturers stop 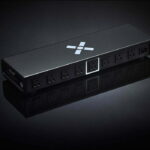